He had done it.

Erik Weihenmayer — who lost his sight in his youth due to retinoschisis — had become the only blind man to summit Mount Everest.

After making the trek back down to base camp, his guide, Pasquale Scaturro, turned to him and offered a piece of counsel, “Don’t make Everest the greatest thing you ever do.”

Summiting the highest mountain in the world, a feat some said Erik would never be able to accomplish, turned out to be just a part of his journey, a journey of breaking down barriers and overcoming obstacles.

It started with Mount McKinley, or as the people of Alaska call it, Denali.

He reached the summit on Helen Keller’s birthday. At 20,310 feet Erik felt on top of the world, but that was only the start. From there, his journey continued higher and higher.

As Erik prepared to reach the top of the world, he was faced with opposition. After all, even people who could see had failed to summit Everest.

“These experts with years and years of climbing experience would tell me that it was a bad idea, that I was putting myself and my team at tremendous risk, and their reasons were valid. They knew a lot about climbing and mountains but they didn’t know me,” Erik says.

Instead of listening to the nay-sayers who doubted him due to his blindness, Erik trusted in the people who believed in him — those who had climbed with him, linked their lives to him and placed their fate in his hands.

Erik knew he could not do this alone. He gathered together a team of experienced climbers and then went to the National Federation of the Blind for sponsorship, which the organization agreed to wholeheartedly.

So when he reached the summit he didn’t just accomplish it for himself.

“I was on the shoulders of 50,000 blind people back at home cheering me on," Erik says. "These people held bake sales and car washes to help me reach the summit. I didn’t just accomplish it for myself but rather to shatter the perceptions of what a blind person is capable of doing.”

The adventures kept going: Erik became one of only 150 mountaineers to summit the highest mountain in each continent and he kayaked all 277 miles of the Grand Canyon.

But what matters more to Erik is the lives he has been able to influence.

For over a decade Erik has been leading through his example of embracing adversity and making it an advantage through his foundation, No Barriers.

VISION — Define a purpose that inspires you to give your best back to the world.

“You should first decide what you want to do, why it’s important, and whether you have the will to persevere," Erik says. "Then figure out what strengths you have or might be able to develop — from scratch, if necessary — to succeed.”

REACH — Move beyond your comfort zone to grow and reach goals.

“The greatest people and teams turn into the storm when others step back. Rising to the occasion once or twice is admirable, but doing it over and over again, adjusting agilely with each and every adversity, requires more," Erik says. "It requires both immense will and sufficient skill, as well as developing new capabilities to rise up to the next challenge.”

PIONEER — Persevere through challenges to innovate.

“When we reach out and try to be innovative in our lives, we usually smack up against a wall of adversity," Erik says. "Conversely, when we experience a big-time challenge, it can propel us toward a creative solution. Innovation and adversity can be seen as partners, exchanging the lead in a never-ending dance.”

ROPE TEAM — Collaborate and connect with others to build strong communities.

“Individual strengths only go so far, and it’s impossible to possess, or to grow, every strength you need to tackle every important challenge single-handedly," Erik says. "Few of your grandest aspirations can be achieved alone.”

“Suffering fulfills two vital purposes. It gives our lives perspective, immunizing us against the countless, more mundane adversities that otherwise would seem so terrible," Erik says. "It can also give our lives depth. Without suffering, our achievements would feel more like bumps than mountains.”

SUMMITS — Find the gifts earned through the struggle.

Summits are powerful insights, only illuminated by self re ection and struggle. As Erik often says, “Summits are not a place of rock and snow, really a summit can be any- where, on a date with your spouse, playing on the oor with your kids, working with your team or reaching a long sought after goal.”

ELEVATE — Impact the world as a leader who serves.

“The ultimate idea is once you go through this journey you use it to elevate the people around you,” Erik says. 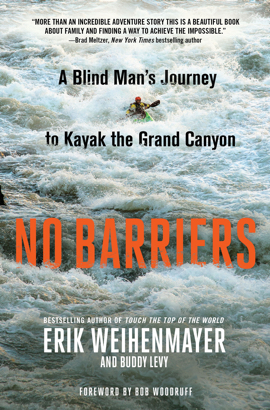 Erik Weihenmayer’s third book, “No Barriers,” dives deeper into his latest adventure, kayaking all 277 miles of the Grand Canyon, while also exploring the lives of individuals who have developed what Erik calls, the “No Barriers mindset.”

The book is now available for pre-order and will be released on February 7, 2017.